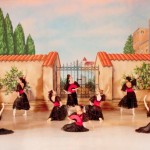 Natalli Reznik, who placed fourth in So You Think You Can Dance Canada 2008, trained for eight years with Donita Ballet School (1995-2003)

I have been with Donita Ballet School for 16 years now and have the best experiences of my life. Donita is the most dedicated and passionate teacher you will find in the city. She truly cares about her students and giving each and every one of the...

Lessons at Donita Ballet School are eligible for either: